How Is The LSAT Scored?

As you begin your journey towards becoming a lawyer, you are probably studying hard in preparation for the LSAT. But besides a rigorous study schedule, it’s also important to understand how exactly the LSAT is scored. Knowing the ins and outs of the scoring of the exam will better prepare you to achieve your desired score. In this article, we cover how raw scores are converted into scaled scores and everything else you need to know about scoring on the LSAT exam.

Studying For The LSAT? Top-Rated Prep Course $150 OFF
Claim Offer

What is the LSAT Out Of?

The LSAT score is based on the total number of questions a test taker correctly answers, which is also known as the “raw score,” ranging from 0-101.

How is the LSAT Score Calculated?

Once the raw score is calculated, a score conversion chart is used for each LSAT to convert the raw score into a “scaled LSAT score,” ranging from 120-180 (120 being the lowest possible score and 180 the highest).

This is like converting a number grade into a letter grade, except it is translating from one number into a more meaningful number. For example, a raw score of 99 out of 101 would be a 180 scaled LSAT score. Here is a model of an LSAT scoring chart: 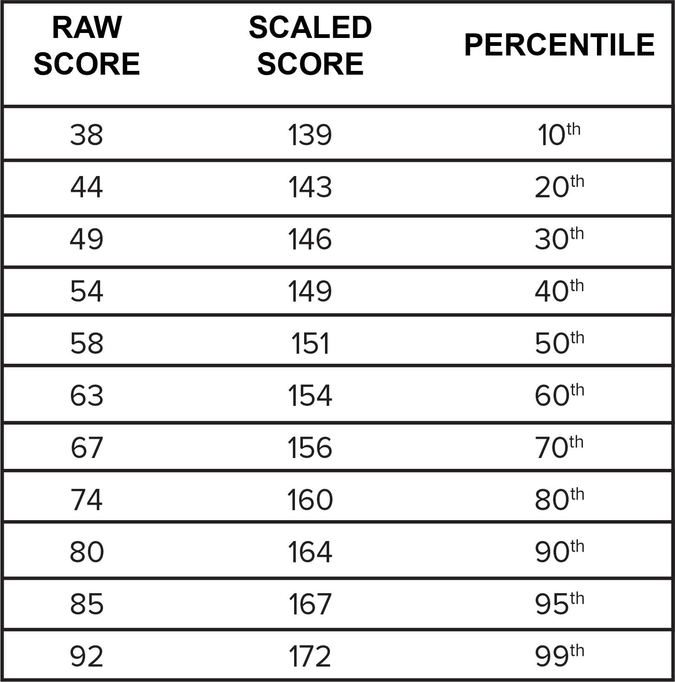 You also want to know how good your scaled score is, and for that you want a “percentiles chart.” The percentile chart will tell you how many people score at or below that score.

So, for example, if you scored in the 99th percentile (172), that means 99% of other test-takers scored at or below that level. The percentiles chart is not just for the single administration that you take, but rather is an average over several years.

There are 61 different possible score outcomes for the LSAT within the 120-180 range. Each score places a student in a particular relative position compared to other test takers. These relative positions are represented through a percentile that correlates to each score.

The percentile is crucial since it is an accurate indicator of your positioning compared to other test-takers and law school applicants. 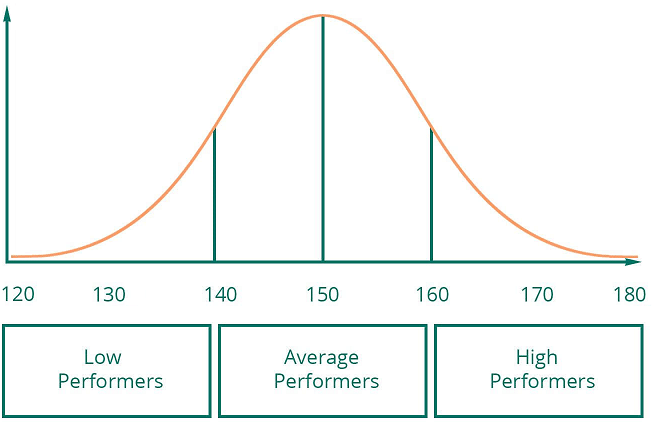 The average LSAT score is around 151. Because the range of scores is so small, minor improvements in your test performance can greatly increase your score and percentile ranking. One point more in your LSAT score pushes your percentile significantly.

While examining your raw score, remember that law schools are looking at your scaled score. So, be sure to check and use your converted scale score, referring to that instead of your raw score when applying.

If you remain among the average, that means you are competing with a majority of students with the same scores. Reaching above that average scaled score and percentile will strengthen your chances of being accepted into your desired school.

Each law school requires a specific average range, some being more competitive than others, and with that, those same schools are ranked the best. So, be sure to take your time researching which schools you would like to apply for as well as their requirements and score standards. You want to be sure to rank within or above your desired school’s expectations for the LSAT.

➡ Related Article: What Is The Average LSAT Score Without Studying?

How Many Questions Can You Get Wrong to Score 170?

If your goal is to reach a score of 170 on the LSAT, the maximum number of questions you can answer incorrectly is 11. Correctly answering 90 out of the 101 total questions should give you your desired score of 170.

If you are aiming for a higher score, keep in mind that even one more correct answer can place you far ahead of other examinees.

Guessing on the LSAT

There is no penalty for providing incorrect answers on the LSAT, so if you find yourself short on time or simply aren’t entirely certain about an answer, don’t hesitate to give it your best guess.

Avoid impulse or random guessing. Instead, eliminate unlikely answer choices first. Reducing your number of choices increases the odds that your guess will be correct.

Once your choices are narrowed, make your best educated guess. Sometimes you might just get a feeling about one of your remaining answers. It is perfectly ok to “go with your gut”. In any case, guessing is far better than leaving a question unanswered.

Where To Focus Efforts

To maximize your score on the LSAT, you should focus your efforts on your weakest section. Again, answering even just 4 more questions correctly on the exam from a raw perspective can have a massive impact on your scaled score.

Thus, if you’re weak on logic games, hammer that section in your studies. You just need to accumulate as many correct questions as possible, and the lowest hanging fruit is always your weakest section.

How many points is the LSAT out of?

The LSAT is scored on a scale between 120 to 180. Raw scores based on number of correct answers are converted into scaled scores to find your 120-180 score.

How are LSAT scores calculated?

Based on the total number of questions a student answers correctly, the “raw score” is converted to a “scaled score” using a score conversion chart. For example, if a student has a raw score of 80, that translates to a scaled score of 164.